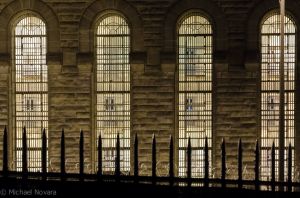 I first walked the hallways of Western Penitentiary in 1987 when I was given a tour of an unused wing.  The outer wall was vast, yet the inner cells were tiny.  I can still remember wondering how a human being could live in such a small space.  Young and naïve, I assumed that I was witnessing the remnants of a less enlightened past.  Perhaps I was.  But now, over 25 years later, it is my understanding that the wing, though modernized, is back in use.

Whether or not one views imprisonment itself as a societal ritual, the mass incarceration of millions of our citizens is rife with ritual, from the mundane repetitive behaviors of the imprisoned population to the scheduled visits by their parents, spouses and children, some of whom will only know their fathers and mothers as they exist behind glass or in a visiting room.  From the architecture, bland food, and uniform clothing, to the supplanting of names with numbers and inevitable de facto segregation, the layers of ritual go on and on.

Although structure is necessary to maintain safety and order in such a place, what happens when someone is released and the structure stops?  Does ritual beget ritual?  Is the saddest ritual of all the return of the repeat offender?  Although many modern prisons provide inmates with self-improvement programs, do we as society really believe that imprisoning people who were undereducated and unemployable prior to being jailed, removing them from society as time marches on, and then releasing them with the label “ex-con,” will somehow lead to a greater good?  Some rituals live forever, some transform, and some we jettison as we evolve.  Given the high cost of incarceration, both monetarily and spiritually, is there a better way, at least with respect to non-violent offenders?

The above photograph was exhibited at the Garfield Artworks in the spring of 2013 as part of a group show on Rituals by AgWorks, a photographic artist’s collective.