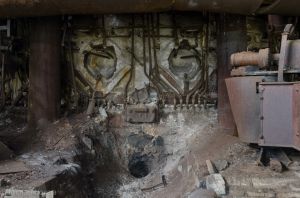 Carrie’s sleeping now, but when she was awake, her eyes received air heated to 1800 degrees, and she exhaled molten steel.  This is a photograph of the bottom of one of the blast furnaces, and the round openings you see were the receptacles for the tuyeres (large pipes no longer attached), which carried the super heated air used to ignite the coke within the furnace.  The burning coke would then increase the interior temperature to the 3000 plus degrees needed to melt the iron ore and other materials.  At that temperature, even the refractory brick could melt, so cooling water was injected behind the brick layer through the smaller pipes that are still evident.  Once the process was complete, the mouth you see would be tapped, releasing the molten steel.  One steel worker who had manned the room when Carrie was operational explained that the temperature immediately below the 1800° tuyeres was 350° to 400°, an ideal temperature for cooking dinner, which they often took advantage of.

This photograph was part of the “Carrie Furnaces:  Contemporary Views” exhibit at the Silver Eye Center for Photography in August of 2013.