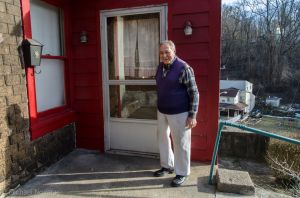 90-year-old Joe Bonadio lives on the steepest paved street in the continental United States — Canton Avenue in the Beechview section of Pittsburgh, Pennsylvania.  Lured by jobs in the steel mills, the coal mines, and the railroad, Joe’s father Santo brought the family to Pittsburgh from Calabria, Italy, in 1897.  They built the Canton Avenue house in 1903, and added on to it over the years to accommodate the ever-increasing household, as Joe was one of ten siblings raised in the home.

Although he lived on Canton Avenue his entire life, Joe earned his living as a golf pro at the Longboat Key Golf Course in Sarasota, Florida, where he wintered for over 50 years, and he is a proud member of the Professional Golf Association’s Centennial Club.  But Joe’s prowess on the golf course is only part of his story.  A lifelong musician, Joe has mastered numerous instruments including the violin, the tenor saxophone, the clarinet, the bass and the flute.  He has played professionally with the Butler Symphony Orchestra and the Sarasota Pops Orchestra, as well as with some of the giants of jazz, including Dizzy Gillespie, Coleman Hawkins, Sonny Stitt, James Moody and Roy Eldridge.

Joe’s life took a turn in the year 2000 when his ceased his winter travels and returned home permanently to take care of his older sister Catherine, whose health was failing.  Joe’s year-round presence in Pittsburgh forced him to give up playing the bass professionally as he could not park in his driveway in the winter and it was just too cumbersome for him to lug the large instrument up and down the many steps to Coast Avenue where he was able to park.  But having to give up the bass did not end Joe’s musical career.  At the age of 79, Joe was invited to learn how to play the flute by Wendy Kumer, the director of the Pittsburgh Flute Academy.  He took her up on the offer and has been playing the flute ever since.  Joe continues to take weekly flute lessons and plays in concerts for the Flute Academy, the Community Band South and the South Hills Flute Choir.

A very active Joe Bonadio will turn 91 this summer.

To see a slideshow about Joe published by Public Source, go here.